Pierce County, WA: Central Pierce Fire & Rescue, along with the larger Pierce County fire service family, is mourning the death of Firefighter/Paramedic John Garner. John was found dead in his home by his fiancé on December 14, 2022.

John’s public service started in the military, where he served in the Army as a Sergeant earning several ribbons and medals.

John’s tenure in the fire service spans more than two decades, starting his career with the Ocean Shores Fire Department. John spent ten years with Ocean Shores before coming to Central Pierce Fire & Rescue. Not only was John a fantastic Firefighter and Paramedic, but he was also very active in the International Association of Firefighters with both Local 2109 and Local 726.

John recently decided to join Central Pierce Fire & Rescue’s Water Rescue Team. John had been actively engaged in the training requirements for his new position, building skills to respond to water rescue incidents within the District and throughout Pierce County when requested.

John’s strong commitment to humanity was present in so many ways throughout his career. John was a constant contributor to the Burn Foundation, providing food and toys for families through IAFF Local 726’s Adopt a Family Program. John actively participated in numerous other programs, including Coats for Kids and MDA-Fill the Boot. To say John gave more than he took would be an understatement. John was simply a great human!

Central Pierce Fire & Rescue will move John from the Thurston County Medical Examiner’s to the Mountain View Funeral Home & Crematory on Sunday, December 18. The movement will begin at 10 AM. The Public should expect to see many fire apparatus, with emergency lights on, on the route from Tumwater to Lakewood. There may be intermittent traffic impacts.

A memorial service is being planned for after the New Year.

For individuals that wish to support the family, a donation account has been established by IAFF Local 726. It can be located here. 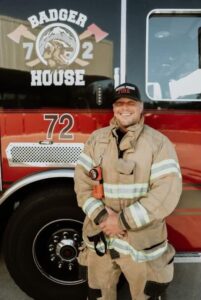